Why dont you take it? 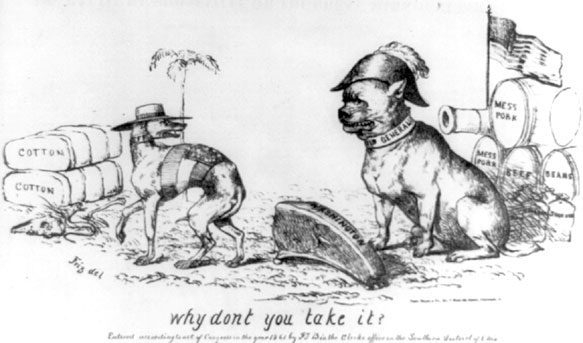 Title: Why dont you take it?

Description: In February 1861 Washington was alarmed by rumors that secessionists planned to seize the city and make it the capital of the Confederacy. The print may have been produced in that context, or during Lincoln’s call to arms and rather anxious military build-up of the capital in April. Here, General in Chief of the Army Winfield Scott, who engineered the Washington defense, is portrayed as a fierce bulldog. He stands guard defiantly over a large cut of beef representing Washington, as a greyhound wearing a broad-brimmed planter’s hat and wrapped in a Confederate flag (Confederate president Jefferson Davis) slinks away to the left. Beyond the greyhound are bales of cotton, a bone, and an animal skull. A small snake coils threateningly in the grass. A palmetto tree, emblem of secessionist leader South Carolina, rises in the distance. On the right, behind the bulldog, are barrels of “mess pork,” beans, beef, sacks of money, and a large cannon. The stars and stripes fly over them. Another version–a crude, slightly smaller copy of this or of a common model, but without the printer’s imprint and copyright line–is also in the Library’s collection (Stern Collection, portfolio 4, no. 2). Weitenkampf lists four versions. Grant (II, p. 5-35) reproduces several versions of the design on patriotic envelopes in use in June, July, and August 1861. Weitenkampf and Murrell attribute the design to Beard.